Systems for verifiable outsourcing incur costs for a prover, a verifier, and precomputation; outsourcing makes sense when these costs are cheaper than not outsourcing. Yet, prover costs are generally ignored. The only exception is Verifiable ASICs (VA), wherein the prover is a custom chip; however, the only prior VA system ignores the cost of precomputation.

This paper describes a new VA system, called Giraffe; charges Giraffe for all three costs; and identifies regimes where outsourcing is worthwhile. Giraffe’s base is an interactive proof geared to data parallel computation. Giraffe makes this protocol asymptotically optimal for the prover, which is of independent interest. Giraffe also develops a design template that produces hardware designs automatically for a wide range of parameters, introduces hardware primitives molded to the protocol’s data flows, and incorporates program analyses that expand applicability. Giraffe wins even when outsourcing several tens of sub-computations, scales to 500x larger computations than prior work, and can profitably outsource parts of programs that are not worthwhile to outsource in full. 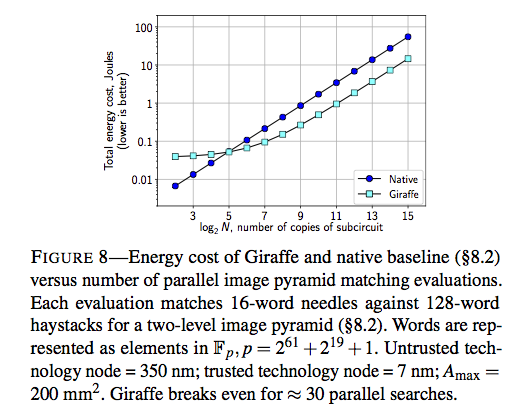